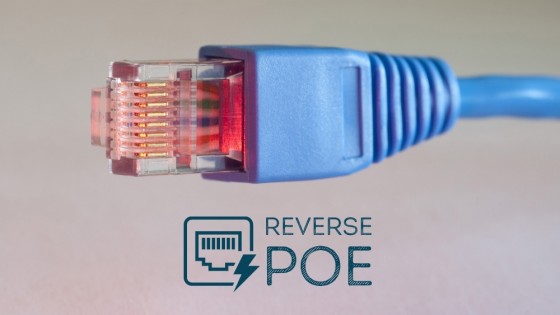 Ethernet is a ubiquitous technology in the modern world. Office buildings, schools, and private homes all use ethernet cables to share data. Still, many people don’t appreciate everything that ethernet can do.

Most adults would recognize that ethernet is used for data and the internet, but did you know it can be used for power as well? Not only can ethernet cables be used for electricity, but they can also be run in reverse! Here is an explainer on power over ethernet and reverse power over ethernet, covering how these functions operate and why IT professionals use them.

What is Power Over Ethernet

How Power Over Ethernet Works

Inside ethernet cables are four pairs of wires. These wires are designed to transport data, but many devices do not require all the wires to manage their data. They can also be used to conduct power, which allows for some useful tricks

Early power over ethernet was limited to 15.4 Watts. This was standardized in IEEE 802.3af in 2003. Since that time, PoE has become standardized and gone through a series of wattage upgrades. In 2018, the modern 802.3bt standard was introduced, which offers 51 W of power for type 3 devices and 71.3 W of power for type 4 devices. To get more detailed information about electricity standards, refer to documentation from the IEEE.

While the power supplied by PoE has improved substantially in the last 20 years, it is still quite restricting. 71.3 Watts is not enough power to run anything like appliances or even moderately sized screens. So what exactly is power over ethernet used for?

Why Devices use Power Over Ethernet

The original use case for PoE is consistent with many of the use cases we see today. Getting reliable power to specific locations can be awkward. By combining data and electricity into one cord, it is significantly easier to wire your devices. Here are a few applications that are common.

Pan-Tilt-Zoom cameras: a pan-tilt-zoom (PTZ) camera is a type of camera commonly used in security cameras. This is a device type that benefits substantially from PoE technology. By their nature, security cameras are intentionally placed in hard-to-reach places, which means connecting them to electricity can be cumbersome. They also require a steady source of both electricity and data. Sites with security cameras often have several cameras, so the annoyance of connecting the devices is magnified. Power over ethernet avoids these issues. View our range of surveillance solutions.

Sensors: whether tracking temperature and air pressure of a room or the acidity of a chemical reactor, there are tons of valuable sensors out there in the world. These sensors may be located far from a power source or in positions where it isn’t easy to wire power. PoE simplifies the process of wiring such devices.

What about Reverse Power over Ethernet?

If you have read this far, you can likely appreciate why standard power over ethernet is helpful in some situations. But what about reverse PoE? How does this work? Why would anyone want reverse PoE?

Reverse power over ethernet functions exactly like regular PoE, except the power travels the other direction. This means your devices connected to a switch can provide electricity to the switch. The switch doesn’t need to rely on its own power to operate.

Reverse PoE makes sense practically, but why is this helpful? It is most commonly used in locations where power supply is an issue. Using reverse PoE saves you the trouble of wiring electricity. Reverse PoE is used to shift the electricity burden from a wireless internet service provider (WISP) that controls the switch to consumers using the internet through that switch. This power is in turn used to power the CPE device and the switch remains functional until all connections have no power meaning there are no active users.

For WISPs, the main challenge is providing power in every area they want to provide an internet connection. Reverse PoE solves the power problem for the outdoor site. Reverse PoE can get power from all ports and keep the switch on to avoid network downtime until all connections are not powered by the PoE adapter connected to their home.

This is different from a power source such as a single socket at the top of the building where the WISP is not able to provide power backup.

If connection 1 is down, the reverse PoE switch shifts to connection 2 to receive power, if connection 1 and 2 are down, it switches to the next connection option. The switch will only go down in case all connections turn off the power and that means there are no active users of the internet connection.

Reverse PoE With Fiber and ONU Power Out

In this network the reverse PoE switch is getting power from the customer home and providing DC power to the ONU and other fiber devices depending on DC power supported by the device.