Wi-Fi 6, also known as 802.11ax, is the most recent version of the 802.11 standard for wireless network connections. It's a backward-compatible upgrade to the previous Wi-Fi standard, 802.11ac (Wi-Fi 5). This means you can connect your current WiFi 5 devices to a WiFi 6 network with no issues at all, and devices that use Wi-Fi 6 can connect to WiFi 4 and WiFi 5 routers.

Wi-Fi 6 was created to improve the reliability and speed of wireless networks, and it is especially useful in smart homes, offices, and public spaces where multiple devices are connected to the same network.

If you're wondering how you managed to miss the last five Wi-Fi standards, the answer is simple: you didn't. The Wi-Fi Alliance launched a new naming scheme to help you figure out which Wi-Fi standards your devices support.

Most of the WiFi devices you currently have in your home or office probably support the previous WiFi 5 (802.11ac) standard.

Rather than increasing the speed of individual devices, Wi-Fi 6 focuses on strengthening the network as a whole when multiple devices are connected.

Wi-Fi 6 provides various new features to assist in alleviating the problems that can arise when multiple Wi-Fi devices are connected to a single network. It allows routers to talk with more devices at the same time, transfer data to several devices in a single broadcast, and schedule check-ins with the router. These capabilities, when combined, should keep connections strong even as more gadgets begin to demand data. 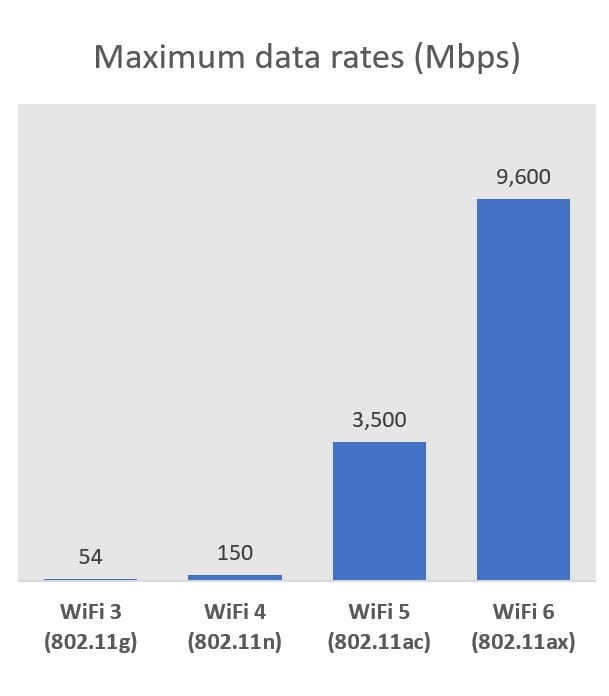 Modern routers and devices already support MU-MIMO, which stands for "multi-user, multiple input, multiple output," but Wi-Fi 6 improves it. In 2015, MU-MIMO was offered as a Wi-Fi 5 update, although it only functioned for outgoing signals from the router. This will be fixed with the Wi-Fi 6 version of MU-MIMO, which will also allow your router to manage incoming signals from multiple devices.

Instead of broadcasting to one device, then the next, and so on, the technology allows a router to connect with several devices at the same time. Currently MU-MIMO allows routers to communicate with four devices simultaneously. Wi-Fi 6 will allow up to eight devices.

OFDMA, which stands for “orthogonal frequency division multiple access,” allows one transmission to deliver data to multiple devices at once.

In simple terms, OFDMA allows your router to serve multiple devices simultaneously on a single channel. It allows your router to divide each channel it uses to send signals on the 2.4 or 5GHz frequency bands into smaller frequency allocations known as resource units, or RUs. Each of these RUs provides your router with a new channel through which to send data, reducing latency.

OFDMA operates by breaking channels into subcarriers, allowing for simultaneous transmission to multiple devices. Different signals can be sent by a Wi-Fi 6 router in the same transmission window. As a result, instead of each device having to wait its turn as the router sends up the data across the network, a single broadcast from the router can communicate with a number of devices. 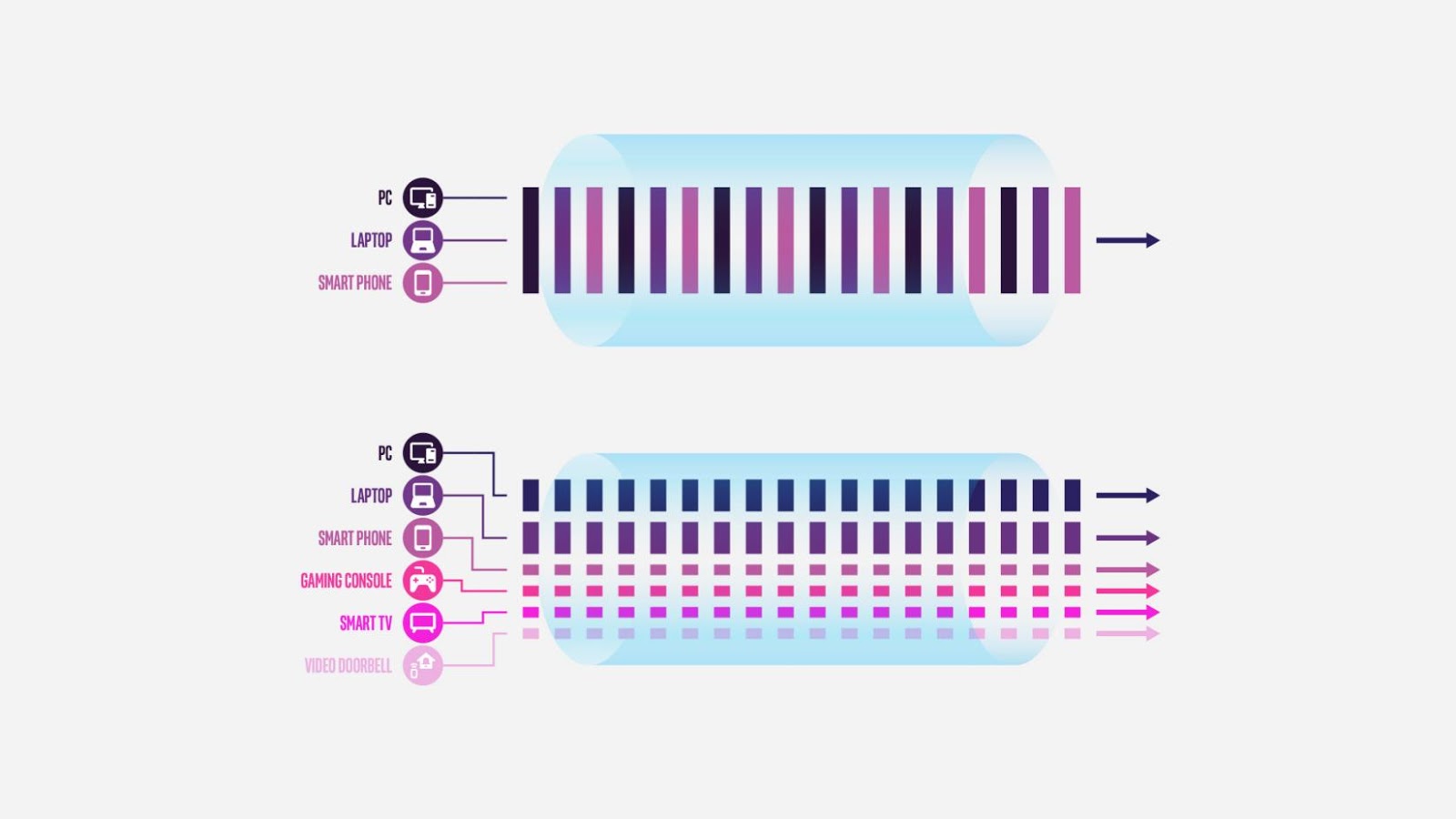 On a congested network, devices on a typical Wi-Fi network (above) may have to wait for the client to send or receive data. OFDMA (below) permits data to be supplied to many devices in the same transmission window, allowing for more efficient communication with several devices at the same time. Because high-priority traffic does not have to queue behind lower-priority traffic, OFDMA can drastically reduce latency.

Another Wi-Fi 6 technology that can aid with network congestion is OBSS. Devices wanting to join a network under previous Wi-Fi versions had to follow a “listen before talk” protocol which meant they had to “listen” for any noise on a channel before sending. They would have to wait until the channel was clear before broadcasting, if there was any noise on the channel. This applied even if it came from a faraway network, in order to avoid any interference.

The access point can utilize a "color" to uniquely identify the network with OBSS. Devices can disregard other traffic on the channel if it is not the same color as the local network. This can help to improve latency and dependability. OFDMA and OBSS, when used together, allow for more effective communication on congested networks. As more of our devices connect to the internet via Wi-Fi 6, our connections will become faster and more stable.

Another technology that Wi-Fi 6 enhances in order to attain faster speeds is beamforming. This method of data transmission is actually rather simple. Rather than broadcasting data in all directions, the router recognizes the location of the device seeking the data and sends a more targeted data stream in that direction.

Target Wake Time has the ability to potentially increase battery life on some devices. This technology allows your router and device to communicate more efficiently on when to sleep or wake up. By effectively communicating with the device’s Wi-Fi radio and only activating it when it needs to be awake, your device will spend less time and energy searching for a wireless signal. This can increase the battery life of your devices, which is particularly useful if you have smart home devices.

When you're in a crowded area with a lot of Wi-Fi enabled devices, Wi-Fi tends to slow down. Consider a packed stadium, airport, hotel, mall, or even an office where everyone has access to Wi-Fi. The Wi-Fi will most likely be slow.

Wi-Fi 6, incorporates many new technologies to help with this. In congested areas with a lot of connected devices, Intel claims that Wi-Fi 6 will boost each user's average speed by "at least four times." This isn't limited only to crowded public spaces. If you have a lot of gadgets connected to Wi-Fi at home, or if you live in a dense apartment complex, it could apply to you as well. 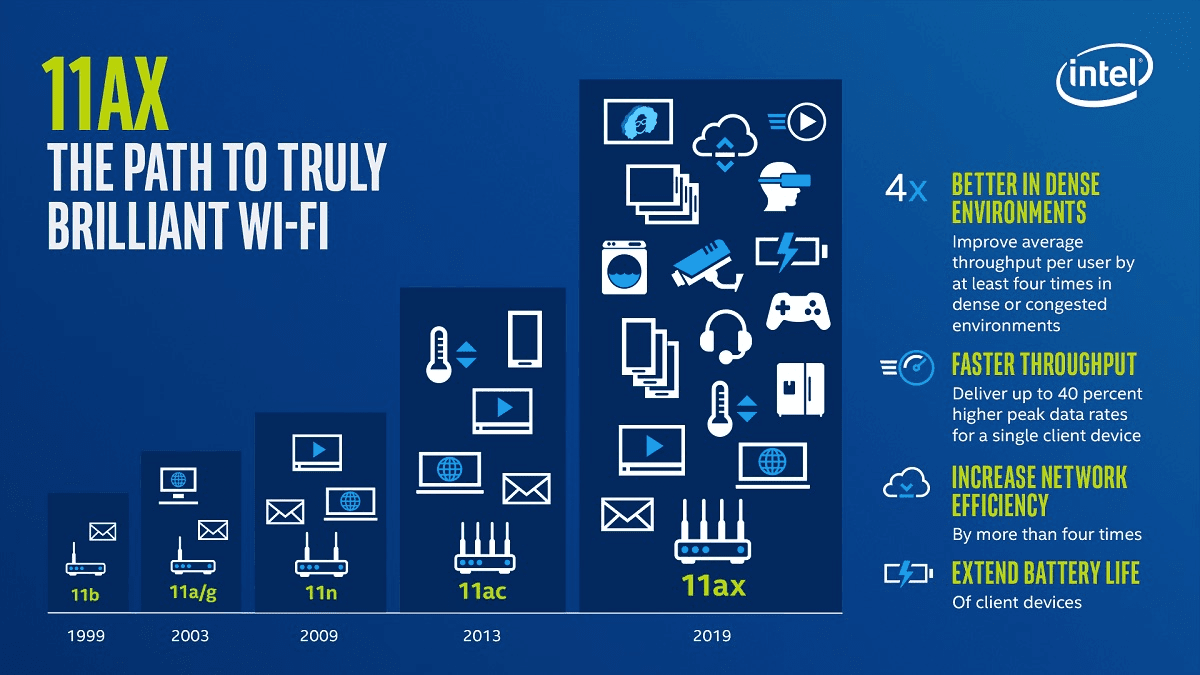 Wi-Fi Protected Access (WPA) is a popular Wi-Fi security technology that encrypts data with passwords. WPA is used whenever a password is required to access a Wi-Fi network. For a long time, WPA2 was the standard, but Wi-Fi 6 is changing that.

The new WPA3 standard makes it harder for hackers to crack passwords by constantly guessing them, and it makes some data less useful even if hackers manage to obtain it.. Increased password security via the Dragonfly Key Exchange mechanism, also known as SAE or Simultaneous Authentication of Equals, is one of the most significant enhancements. By adopting a more advanced method of establishing the handshake with the Wi-Fi network, this authentication mechanism makes passwords more difficult to hack.

Wi-Fi will offer more robust security options than ever before, thanks to this extra layer of protection and greater encryption. This is an excellent illustration of how Wi-Fi 6 improves things without detracting from the user experience. For a Wi-Fi 6 device to receive certification from the Wi-Fi Alliance, WPA3 is required.

Devices that want to send a Wi-Fi transmission modulate the signal of a frequency on a specific radio channel. To the device receiving the transmission, those specific modulations signify specific bits of binary code. This approach is called Quadrature Amplitude Modulation, or QAM. The better your router is at QAM, the more binary code it can send with each transmission.

A Wi-Fi 6 router is required

New devices are coming with Wi-Fi 6 by default. As you replace your phone, laptop, and game consoles over the years, you’ll bring home new ones that include the latest version of Wi-Fi.

There is one thing you will have to make a point of going out and buying, though: a new router. If your router doesn’t support Wi-Fi 6, you won’t see any benefits, no matter how many Wi-Fi 6 devices you bring home. To get the most out of 802.11ax, you'll need both a Wi-Fi 6 router and Wi-Fi 6 devices, although if you acquire a new router, your older devices will continue to work normally.

Companies such as Ubiquiti currently offer Wi-Fi 6 access points, such as the UniFi 6 Lite and the UniFi 6 LR.